Elevate Your Surfing With Us!

Watch the videos, would you say this device works on certain types of sharks?

🏄 If you care about the ocean and the creatures that call it home, then you should check out the World Surf League and their pure page.

🏄 Margaret River Pro Cancelled Due to Shark Activity – WSL and surfers decide to favor athlete safety over “all else”, says Surfline. 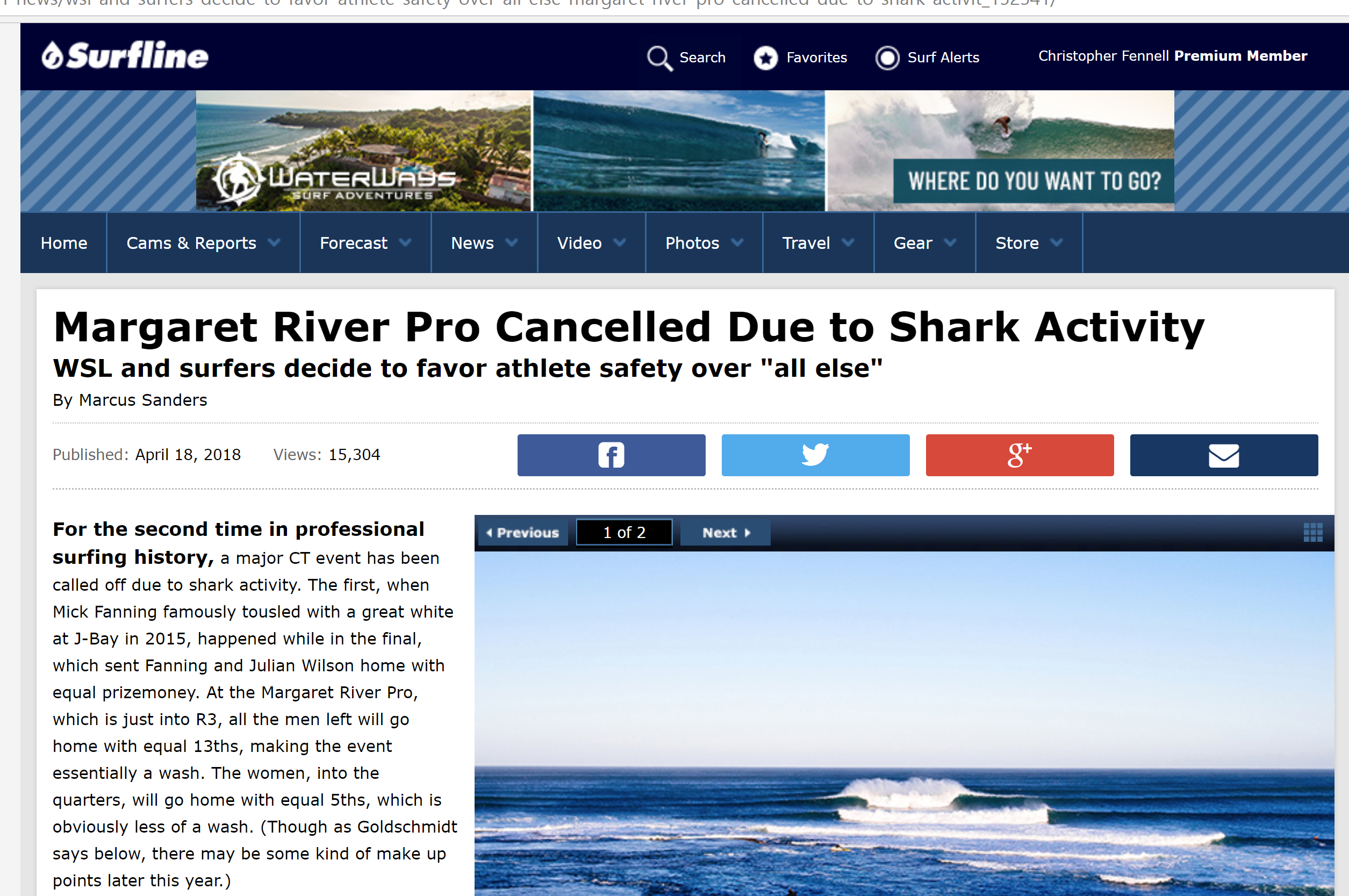 For the second time in professional surfing history, a major CT event has been called off due to shark activity.

🏄 Tuesday, May 23, 2017, SAN CLEMENTE, Calif. (KABC) — All beaches remained closed in San Clemente Monday after more than two dozen sharks were spotted off the coast.

🏄 Up to 25 sharks were seen in the waters on Sunday within 25 yards of the beach between Cotton’s Point and Capistrano Beach, some up to 10 feet long.

🏄 Margaret River in Australia and Africa have long been known as “Sharky Waters”. What does that mean? It means that you know there are more than likely mature Great White sharks in the water even before you paddle out.

🏄 If you are in HB and you see a Sheriff’s helicopter circling above the water, and if you also see Huntington Beach life guards on jet skis in the area, it is possible that great white sharks have been spotted in the area.

🏄 According to SurfLine.Com article: Just in time for Halloween weekend, the sharks of southern California have returned. Or did they ever leave? Either way, we’ve received reports (and footage) of multiple encounters stemming from Thursday evening at opposite ends of Orange County.

The first comes from Upper Trestles where, once again, Surfline’s cameras captured a shark breaching just outside the pack of surfers. According to San Clemente lifeguard Blake Anderson, the last shark sighting in the area was from October 15th. So, not very long ago. Anderson continued: “[The sightings] are here and there, but we’re not seeing the big groupings like we did back in May. I don’t know if they’re going to leave anytime soon. They like this water temperature, and there’s lots for them to feed on. When the water got up to the 70s, we saw them kinda disappear; then when it went down to 69 or 68 degrees, they showed up again. That’s just an observation.”

🏄 And next, we head north to Huntington Beach, where local OC surfer Reagan Ritchie was ‘bumped’ in the water [by a shark] just before sundown. Ritchie was surfing Magnolia Street with Daniel Shea when the encounter happened. Here’s the deets:

“All of the sudden I had this forceful jolt from under me. Right about between my fins, my board lifted enough to send me sort of front heavy like when your too far up on your board. I’m a pretty large human and the power was very, very real. I didn’t look around to see what it was and I never made eye contact. I fished and surfed enough to rule out most species but Mr. fluffy himself.”

Look, we’re not trying to be alarmists or anything; we’re just reporting the facts. And by the looks of it, the sharks of southern California have decided to stick around the lineups…for now. 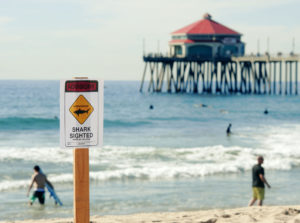 Lifeguards post warning signs along the beach in Huntington Beach on Friday. Lifeguards scared away a 7-foot, juvenile great white shark that was spotted swimming from the Huntington state beach to the local beach.

So Many Great White Sharks in So Cal These Days

🏄 Why have the sightings gone up exponentially? Is it just because we are more aware of them or is something else happening? Is it all of the bat rays and sting rays in the water (Their food source). Why are people catching great whites while fishing off of the Huntington Beach Pier or from the shore, and then being told to release them? I mean, really? What the * is that? That is insane. How many sharks are there but not seen? And yet we paddle out into sharky waters, along with everyone else.

🏄 There are so many sightings these past few years, sometimes 3, 5, or even 16 great whites at one time in one place, but most of the time there is no attack in So Cal.

🏄 A great white shark thrashes around with a big hook through its mouth. Not far away, surfers sit on boards waiting for waves to roll in. The hooked shark in Huntington Beach raises concerns again about surfer safety. 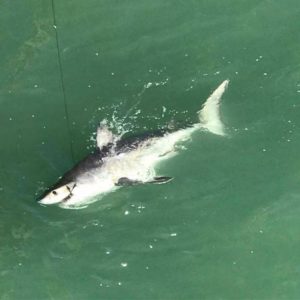 🏄 A 500-pound great white shark caught from Huntington Beach shore then released back into the water. 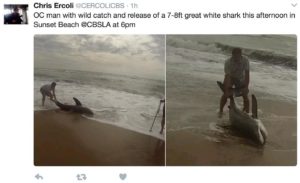 Will sharks show up at the U.S. Open of Surfing? Here’s how organizers are preparing

🏄 NEWS 2017/05/10/🏄 15 sharks spotted by OC Sheriff’s helicopter near beachgoers prompts warning from the sky: ‘Exit the water in a calm manner’.

15 sharks spotted by OC Sheriff’s helicopter near beachgoers prompts warning from the sky: ‘Exit the water in a calm manner’

🏄 A video (Watch Below) shot from an Orange County Sheriff’s Department helicopter gives an overhead view of great white sharks hanging around near shore in Capistrano Beach as officers warn paddleboarders and swimmers near the surfline.

Over the loudspeakers they said “You are paddleboarding next to approximately 15 great white sharks,” Deputy Brian Stockbridge said in the video shot at 1:53 p.m. Wednesday, May 10, above the Dana Point beach. “They are advising you exit the water in a calm manner. The sharks are as close as the surfline”.

In the latest video, sheriffs are heard discussing and contacting local lifeguards about issuing a warning over the loudspeakers.

Do you want us to make any announcements?” one asked. “We have some people real close to some of the larger ones.”

Make sure to watch the full video. It will give you an idea of what the helicopters are doing flying around much of the time.

🏄 There have been several shark sightings at Trestles. But what makes these sightings significant is that all of those sharks breached the water and were totally airborne. You can see them in the videos. Here is a those great video of one of those.
Shark Breaches at Lower Trestles on May 3rd at 715 am. Great video footage.

🏄 Kelly Slater detailed the encounter on the Orange County/San Diego County line: “Saw an eight-foot great white breach 50 yards from me and a friend last night at Lowers. There were six people out and I think four of us saw it jump. Caught a couple more waves.”

🏄 In other shark-related news, a sizable great white apparently cleared the lineup inside at Doheny, too. It’s officially an epidemic.

🏄 Breaching shark brings Surf contest to a halt at Trestles 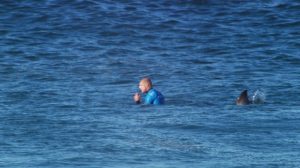 Over the weekend, a 9-to-10 foot shark made an appearance during a surf contest at Huntington Beach Pier. The water was evacuated and closed for the following 24 hours.

♦ A woman who lost part of her right leg to a shark attack while wading at a popular Southern California beach was listed in critical condition at a hospital. News said a woman Critical After Shark Attack on California Beach

♦ While it is uncommon sharks do attack people on SUP boards, usually biting the board and not the person. Below is a series of videos and links to sites that will show you shark SUP attacks around the world (Not in So Cal). Each time it happens we will add it here, to keep you informed.

1. a tiger shark attacked a SUP rider in Maui

This is a great video, it shows paddleboarder’s close encounter with shark A standup paddleboarder in Florida caught the moment he was knocked off his board by a shark on camera.

4. VIDEO: Paddleboarder uninjured after shark bites his SUP board off Wailea Beach

♦ One thing to consider is to but a SharkBanz or similar devices that are said to provide some form of protection against sharks. Don’t believe me, yes I wear one, but watch their videos and then you tell me if that is bs. 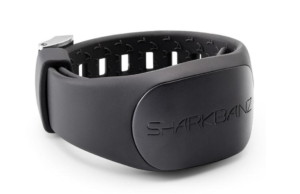 (As they say): REDUCE THE RISK: Sharkbanz are a convenient and effective shark deterrent for the beachgoer, swimmer, and surfer. Read the reviews

Learn more about us